It is possible to arrange for a guided visit of several of the museums in Toulouse.

One of the richest collections of medieval art in France with a huge collection of painting in a gorgeous 14th c monastery, this is a very famous museum. Among the special features of the Augustins museum is its enormous and impressive collection of gargoyles taken from the churches of Toulouse, and its medieval cloister and garden, havens of peace and quiet in the heart of the city. Come and join me for a stroll through medieval art in this, the second oldest public art museum in France!

Open Tuesday through Sunday from 10 to 6, Wednesday night till 9 pm 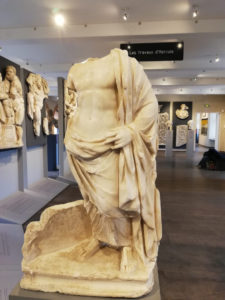 The St Raymond archeology museum is a marvelous gem that has a rich collection of statuary, objects, and scale models of Antiquity. Part of the impressive collection here is a selection of glorious mosaics taken from rich Roman villas, and a huge number of busts of famous (and not so famous!) emperors and their families. There are even some gold artifacts taken from the tombs of Gaulois dating back to their wars with the Romans in 50 bc. You get to see the fabulous workmanship of the artists. This museum offers a superb way to imagine life in Antique Roman Toulouse.

Open Tuesday through Sunday from 10 to 6

The Abattoirs museum was opened in 1999 and is the only museum dedicated to modern and contemporary art in Toulouse. Housed in a fabulous brick structure dating from the 1820’s, it has a huge permanent collection of art from the second half of the 20th century. It also hosts important temporary exhibits, either of individual artists or thematic group shows. For those who are interested in current artistic trends and also want to see one of the most impressive structures built in the 19th century in Toulouse, this is a must.

Open Wednesdays through Sundays from noon to 6 pm, Thursday night till 8 pm 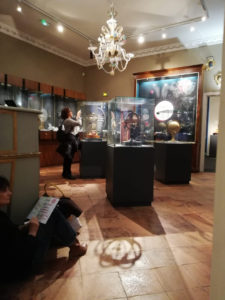 A small gem of a museum, housed in a 16th century Renaissance mansion, the Dupuy museum is devoted to collections of precious objects and the graphic arts. It has a huge collection of rare clocks, ornamental ceramics, and locks, among others. The Dupuy also hosts artists exhibits : painters and sculptors, often associated with the southwest of France. Recently there was an exhibit of artists from the Pyrenees School, lovely paintings of mountains and the region dating from the end of the 19th century. This museum is a lovely surprise.

Open Tuesdays through Sundays from 10 am to 6 pm