Thematic walks and visits of Toulouse offer a voyage to a specific place or moment in history that has left an impact either because of art, architecture, politics, history, or culture. These visits offer an opportunity to explore a subject in more depth. 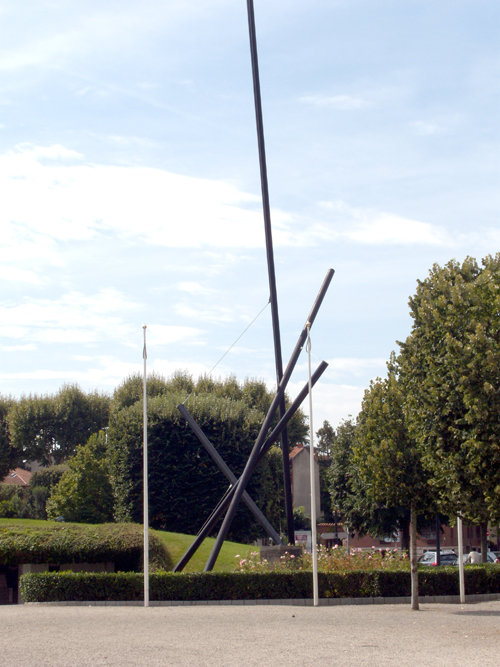 Toulouse was home to an important network of Resistance during W.W. II. Situated in what was at first the “free” zone, the city welcomed those fleeing the German invasion and Fascism. It was this population that helped create the first important resistant movements. Visit the Memorial to the Resistance*, the sites of some of the actions taken, see where the Gestapo had its headquarters and walk along a path of monuments while hearing the stories of those who are honored for their courage and determination.

*The memorial is open only weekdays

Pastel, Power, and Glory: The Rise and Fall of Fortunes 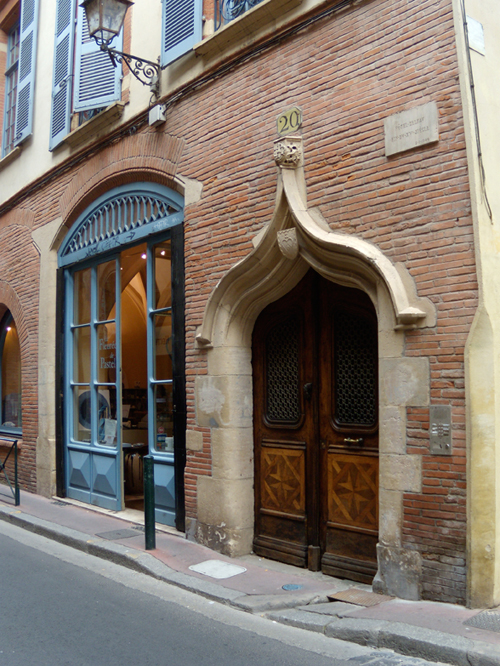 In 15th and 16thc. Toulouse, great fortunes, grand mansions and huge egos competed for fame, glory and riches. All thanks to the commerce of a little indigenous plant called pastel, that became the “royal” blue dye. Some of the incredible Gothic and Renaissance mansions and palaces built at that time still exist. Follow the “pastel path” to see these glorious homes with their elaborate towers, elegant courtyards, and carved doorways. Learn how the “pastel blue” was made, see examples of the color, find out why great fortunes were made and lost, all thanks to a little plant called pastel. 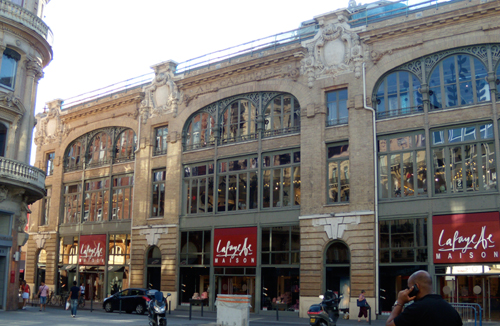 Glass, wood, iron, curves and domes, that is Art Nouveau at its finest. Clean lines, relief sculpture, and floral decoration, that is Art Deco. Starting in the late 19th century, Toulouse took on a “new” face – leaving behind the MIddle Ages, the city opened up to these new styles. See the first, magnificent department store of Toulouse with its glass dome. Walk along rue Alsace Lorraine and discover Art Nouveau and Art Deco landmarks: sculptures, mosaïcs, and doorways. Visit the Public Library, an Art Deco historical monument with its 96 m long frieze. Explore the details of a new kind of architecture and discover some of the unknown 19thc. treasures of Toulouse. 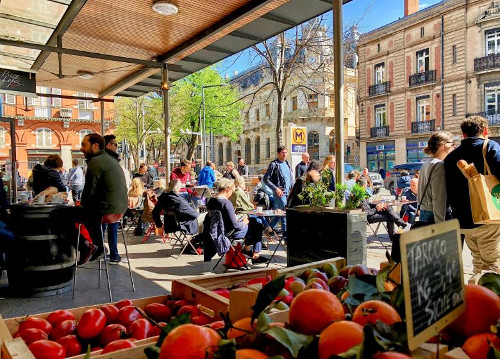 Starting at the Carmes Market which was a magnificent convent, we will explore the area that is rich in Medieval vestiges and also discover the different markets that exist or existed in old Toulouse. From the Carmes we will go up the rue des Filatiers where the goldsmiths lived, pass by where the ancient grain market was, then go to the medieval stock market and then go on to finish at the Victor Hugo market, the most important covered food market in Toulouse.

Weekdays a tasting can be arranged in advance: cheese, wine and a little charcuterie

Heretics and the Middle Ages: The Inquisition and the Cathar 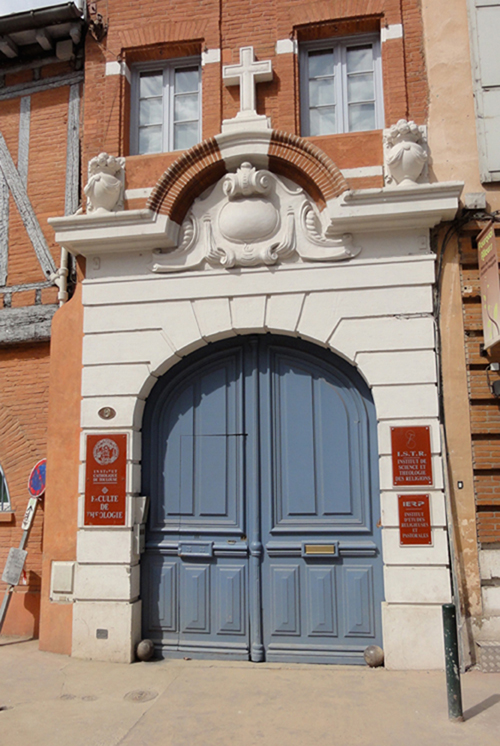 The Inquisition was created in Toulouse in the early 13thc. to counter the mounting influence of the Cathar movement. The city was “home” to the terrible Inquisitors who terrorized the population of the entire southwest region of Languedoc. Participate in this fascinating return to the past, visiting its house* right in the heart of the city, find out how the Inquisition functioned, listen to stories of those who lived through this era, and see buildings that can claim witness to those long ago times.

*A visit inside the house by reservation only

Poets, Ponds and Peacocks: Public Gardens in the Age of Enlightenment 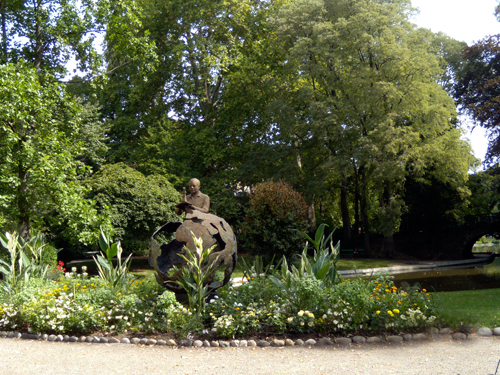 At the end of the 18thc. Louis de Mondran, an aristocrat and visionary from Toulouse, made of his life’s work the opening up and “modernization” of medieval walled Toulouse. He designed parks inspired by English painters and philosophers, and created public garden spaces with gazebos, rose gardens, ponds, and meandering paths. Participate in this walk through a wonderland of trees, flowers, ponds, paths and sculpture as we visit the Royal Garden, the Grand Rond, and the magical Botanical Gardens. A beautiful walk in all seasons! 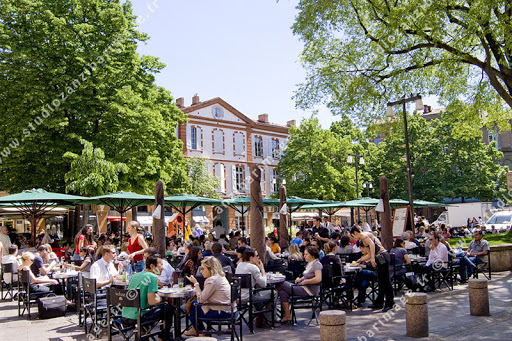 Starting at the Place Wilson, this lovely, fun and informative walk takes you to some of the most interesting, historical and beautiful of Toulouse’s squares. We go to visit the Place St George, the St Etienne Square, the Place Rouaix, and end at the beautiful and very popular Place de la Trinité.

Each square has a unique history; some date from the early Middle Ages, others are more recent, but each of them has a fountain or source of water that was, or still is, a central part of its story.

These squares are the heart of life in Toulouse – surrounded by shops, cafés or restaurants, they give you a glimpse of what Toulousains like to call – “la belle vie”.

As part of the tour, a quick coffee stop can be included 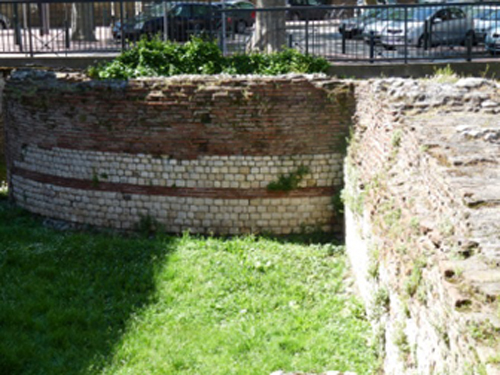 Under the Roman Empire, Toulouse was a major commercial port and its citizens lived a privileged life. Starting with a visit to the remains of 2000 year old ramparts behind St. Etienne, then going on to where the devotional statues were placed on St Etienne Square, we move on to where the temple, forum and theatre stood. The visit goes down the ancient cardemus maximus, and on to the site of the northern gates of the antique city. Along the way, find out how Gallo-Romans lived and discover the last vestiges of that glorious civilization left in Toulouse.

Floods and the River: Water in Toulouse 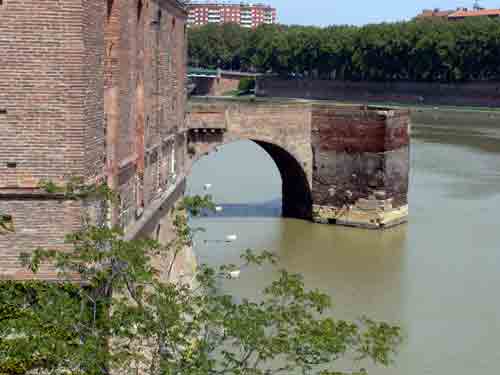 Since the early Middle Ages, people have crowded around the Garonne to live and work, suffering the floods and unpredictability of the massive river. Starting at St. Michel bridge, see where the Count’s mills were in the year 1000, discover the little known area around the Garonnette, which used to be an island where the waters were harnessed to create “lowly” jobs. Learn about the ‘little’ people whose livelihoods and destinies depended upon the sometimes calm, sometimes dangerous, but always powerful river. We end the walk on the other side of the Pont Neuf where you “re-live” the flood of 1875, the worst in Toulouse’s history!

Zen in the Heart of the City: The World of Compans-Caffarelli 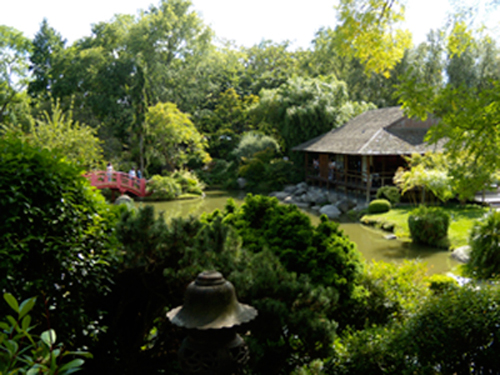 Toulouse is home to a magnificent Japanese garden that is a replica of Kyoto’s famous Imperial gardens. Placed inside the sumptuous gardens of Compans Park, here you enter into another universe. A Zen dry garden juxtaposes a beautiful wet garden with miniature “mountains” and ‘waterfalls’. Walk through this exquisite space, learn about the symbolism of the elements there, meander past sculpture and ponds. See the walls and gates of the Japanese garden and the ramparts of medieval Toulouse, follow the Canal du Midi as it crosses through the city, while finding out how and why this magnificent garden and park were created. 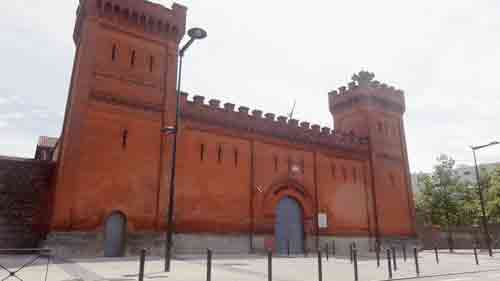 From the ancient 12thc. Palace of the Counts of Toulouse, under what is now the huge Criminal Courthouse, to the 19th century prison of St. Michel, follow along the paths of justice and injustice in this walk on the south side of the city center. Discover the remains of the ancient palace gates inside the new courthouse, walk along the ancient trenches outside the ramparts, where bodies of the condemned were thrown, see where the original Roman and Christian cemeteries were, and go to see the strange and infamous neo-Gothic St. Michel prison which began as a model of reform, and where Resistance heroes were executed. A long, fascinating history of power, judgment and architecture.